If you're looking for information on AO and Spencer microscopes, don't bother with this little site and don't pay for manuals on eBay.  The central repository of all things AO is maintained by Steve Neeley and downloads are FREE! Just click here:  AO CENTRAL

The AO Series 4 illuminator is not the best.  In the past I have converted them to 20 watt quartz-halogen but now prefer the LED.

I recently got a "deal" on an AO Series 4 microscope.  The catch was that the complex lamp-holder assembly was missing.  While browsing through the local Wal-Mart I noticed a three-watt white LED available as a "MagLite® Upgrade."  This is a direct replacement for the standard flashlight bulb and comes in two-cell (3 volt), three-cell (4.5 volt) and four cell (6 volt) varieties.  Making an LED conversion turned out to be remarkably simple and effective.

Here is the Series 4 base as received: 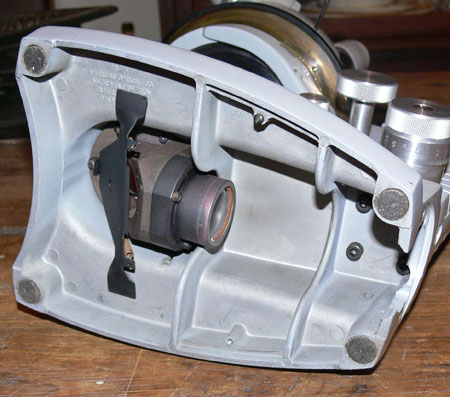 And here is the 3-watt LED assembly: 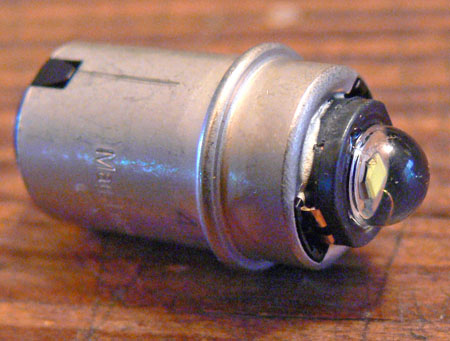 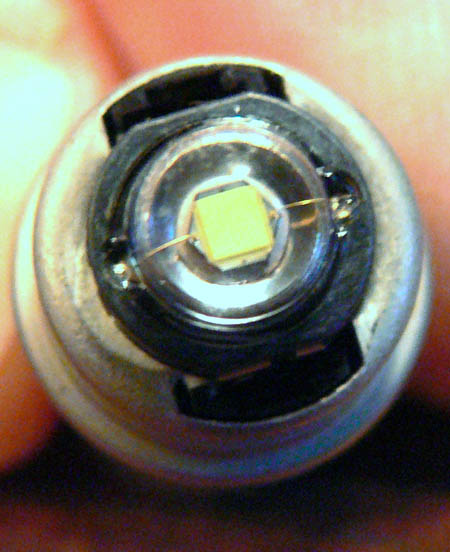 Notice the white adhesive which holds the LED in position.

I first made an excessively complicated brass lamp holder - planning to reproduce the original centerable mechanism:

As I began to work with the actual lamp, two complications became apparent:

1) The LED lens provides a "Lambertian" light source, meaning the illumination is diffuse rather than focused. This turned out to be good news, because alignment is less critical.  Since the collector of the Series 4 is frosted, I decided to mount the device without centering adjustment and hope for the best.

2) The LED board was mounted at an angle within the housing.  The circuit board with the LED was glued in place with a hard, white adhesive. This can be cracked and the LED carefully realigned.  A drop of superglue gel seems sufficient to hold it in position.

Eliminating the adjustable centration allows a simple mount and a sealed environment for the lamp.  Heat would be an obvious issue, but I reasoned that if the device was designed to work inside a flashlight, a sizeable metal mount would act as an adequate heat sink. 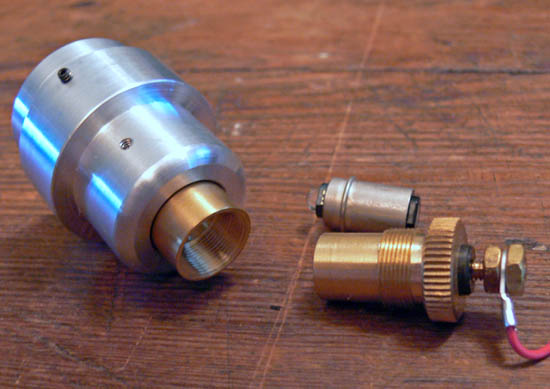 The adapter is a press-fit on the AO collector, held in place by a single set screw.  Alignment is to the machined surface of the collector. The lamp holder slides inside the adapter, also secured with a set screw. 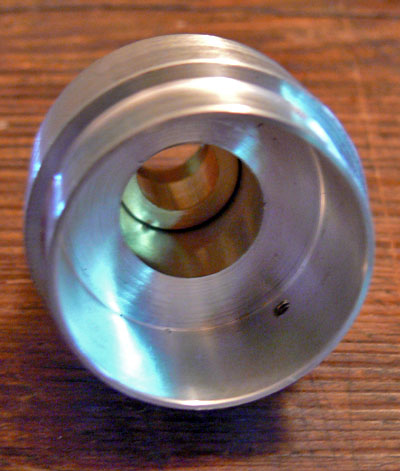 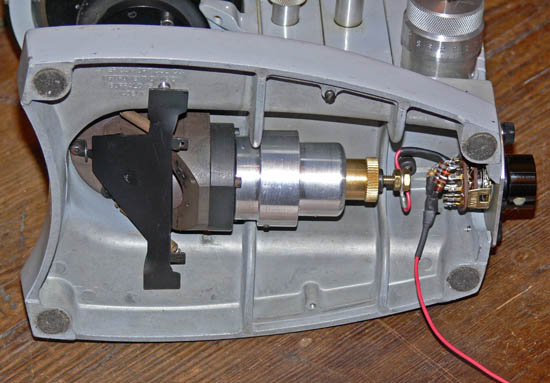 'Notice the switch and resistors at the back.  The LED comes on at about 2.7 volts and is actually too intense for bright field observation at the rated 6 volts.  I tested this with a bench power supply, but wanted the 'scope to be portable.  I tried a variable voltage regulator, but the voltage drop was excessive.  The simplest way to control brightness is to add a current-limiting resistor in series with the lamp.  My junk box yielded a six-position switch and an assortment of 1/2 watt resistors.  Trial and error produced four resistances which, combined with an open circuit (off) in the first position, and direct connection (full power) in the sixth position, give a nice range of illumination. The best feature is the constant color and very pleasant illumination. If you are concerned about a 1/4 watt resistor powering a 3-watt device, remember that the wattage is reduced in proportion to the resistance.  For the brightest positions I used groups of resistors in parallel.

Here is the first trial on batteries: 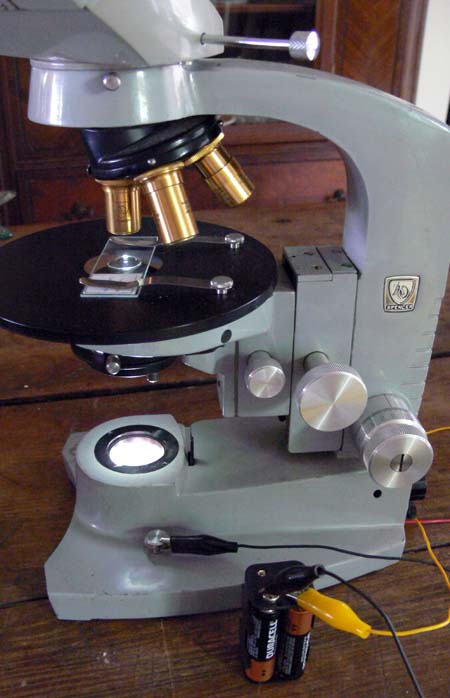 Four AAA pen-cells ran it for more than an hour with minimal heat.

There is no room under the scope for batteries, so I will need to put a connector on the back.  This will allow use of an external battery pack or other power supply.  Since an LED is a diode, it can operate directly from a standard 6-volt AC microscope power supply.  HOWEVER, inductors can produce spikes, which would convert the LED into a fast-blow fuse (someone on the list referred to a SED - smoke emitting diode - 'very well said).  I won't try this until some sort of regulation is in place.

The intensity control will move to the front, making the feel a bit more like a Series 10.

I am considering an LED conversion for the 100-watt halogen lamp in my Wild MDG4 base.  I believe it will be brighter.

This has generated a surprising amount of discussion on the Microscope group. Having spent about two-hours total making the adapter, I've spent a good bit time more trying to explain it.  Here are some numbers for those so inclined.  It's doubtful if any short-wave UV is being generated and even if so, whether it could make it through all the glass in the optical path.  However, better safe than sorry.  My brother will be testing the LED with a UV-photo spectrometer in the next week.  I'll post the full spectral curves ASAP.

Over-heating has not been a problem, but for a simple reason.  Below is a
table of external electrical characteristics, based on a new set of Duracell
alkaline D-cells.

The wattage figures are surprising.  Someone please check my math!  An
incandescent bulb running at 0.024 watts would not be of much use. The LED
is MASSIVELY more efficient, even with the internal electronics.  Maximum
power consumption of over four-and-a-half watts is certainly a surprise.
Overheating SHOULD be a problem.

With a 20-Amp Laboratory power supply, the LED will not draw more than about 0.8 amps, even at 6 or  6.2 volts
This limit appears to be the effect of the self-protection circuitry kicking in.

At the first four settings, heat and auto-dimming should not be an issue.
The low power consumption makes a battery pack feasible.  I will be using
the scope for DF and phase, so will undoubtedly try the full brightness.
I'll set up several instruments (including temperature measurement) and
report the results. If need be, I believe I can detach the emitter and mount
it directly on a heat sink.  At that point though, the convenience factor is
eliminated and it's time to shop for specific components for a more "ideal"
spectrum.

Questions were raised on the Microscope group about possibly dangerous UV output and a spike and trough at the blue end.
Luckily my older and smarter brother (Everett Spell) has the right equipment in his lab, so here's the news, good and bad. 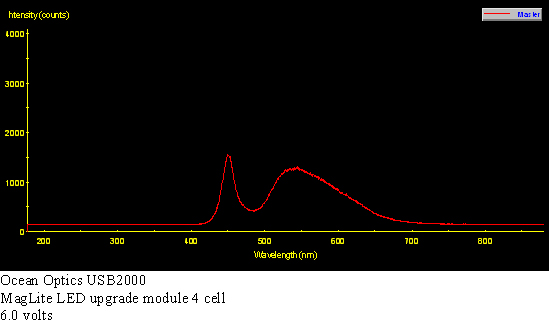 Visible light is 390 to 780nm, so there is no appreciable UV.  I don't expect to go blind from using the converted microscope  That's the good news.  It would be nice if the remaining curve were flat and even, but LED's are a long way from that.  As I said above, I find the light quite pleasant. The human eye can adjust to almost anything.  Photos (through the scope) to come.

Well, pun intended, it's not as bad as it looks on paper. All my initial observations were made with histological slides, where green isn't much of an issue.  Red and blue are almost all you need.  Once I saw the above spectrum, algae became an immediate target.  Before heading off to work this morning I did some quick photography to access the degree of the problem.

*I was taken to task by someone on the Microscope list for calling this "green."  The interesting parts of the graph happen to fall between the standard color designations.  Since there is a visual abundance of blue, there seemed no point in splitting hairs and calling it blue/green.  If you can read the graph and standard English, I presume you will understand what is meant.  Useful criticism and suggestions are always welcome :-)

The images have been cropped, so you might put the final magnification around 400x.

When I take RAW photos with the CoolPix, the overall hue can best be described as brown, even with 100 watt quartz-halogen at full voltage and a blue filter.  The contrast is also very low.  Here's a RAW image with the LED illumination.  The culture doesn't get much light, so the greens aren't vibrant under any circumstances.  This may be a fundamental flaw in this particular experiment.  I will need to repeat it with an intensely green subject: 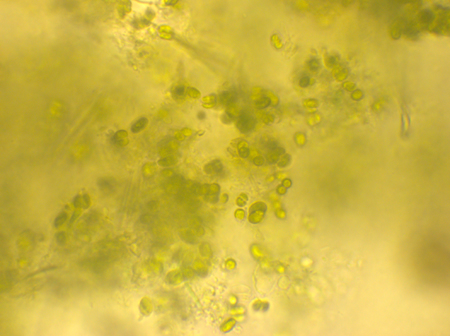 This is better than expected.  So far so good.  I played with it a bit in Photoshop and found that there is essentially NO GREEN in this image.  'Not so good.

Here is the same image with two adjustments - color correction and increased contrast: 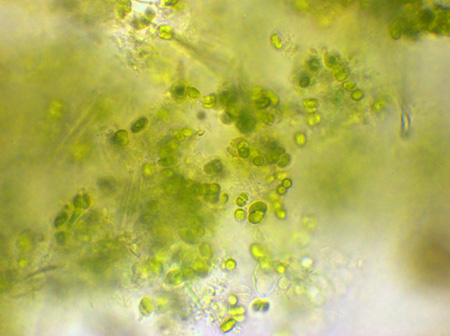 There is still no green present, but it's somehow acceptable, at least to my eye.
'Go figure.

While hurriedly perusing this slide for anything to image, I was briefly  distracted by the following creature (presented both RAW and "improved."

I don't often observe protozoa these days.  If I saw this in a blood sample I would be rather alarmed, but have no idea what it is or what it's doing in a drop of water.  'Presumably a harmless nematode.  It is happily reproducing, so the culture isn't dead yet.  This is pasted from two frames.  I've left the outline so that you can see the color fringe.  There are also purple splotches in the background.  This is just one instance, but I believe these to be an artifact of the LED light source.  Again, this was done in great haste.  I'll try to do a little better soon. 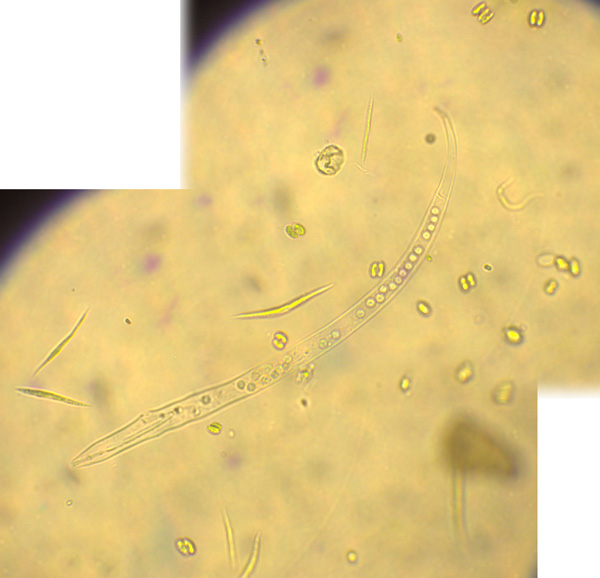 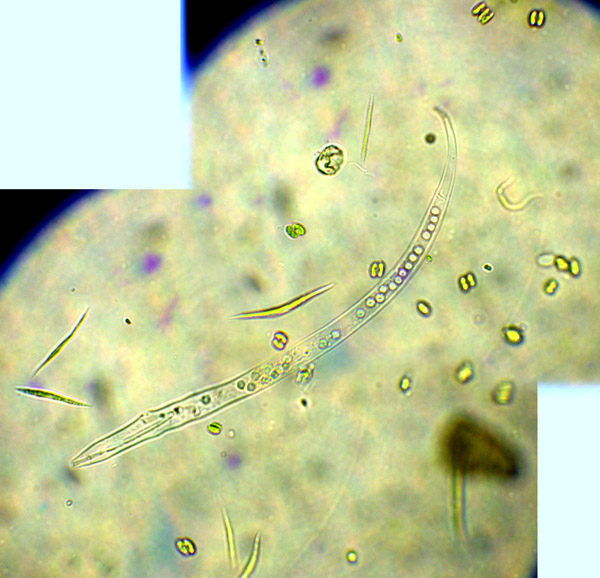